email: cbjertness@flcfargo.org
phone: 701.235.7389
Pastor (Chaplain) Corey Bjertness was born in New Rockford, North Dakota. He attended high school in  Sheyenne, ND, graduating in 1981. Following high school, he attended the Lutheran Bible Institute of Seattle where he received an A.A. degree in Biblical Studies. He continued his education at Valley City State University in Valley City, ND, where he received his B.S. degree in Education. He earned his Master of Divinity degree from Luther Seminary in St. Paul, MN, and has done Ph.D. studies in Communication from North Dakota State University.

On May 21, 2003, he was commissioned in the U.S. Army National Guard with the rank of First Lieutenant. He was promoted to Captain Feb. 13, 2006. His first assignment was as Chaplain of the 834th Aviation Support Battalion, followed by a tour of duty in Iraq from January 2006 to July 2007. He served as battalion chaplain for the 1/125 FA (Strike) battalion during deployment. He has also served as Brigade Chaplain of the 141st Maneuver Enhancement Brigade in the North Dakota National Guard and the 347 Regional Support Group in the Minnesota National Guard.  He is currently the Camp Ripley Installation Chaplain for the Minnesota National Guard and holds the rank of LTC.

Pastor Bjertness and his wife, Beverly, have four children: Catherine, Abby, Ben, and Josiah and reside in Horace, ND. 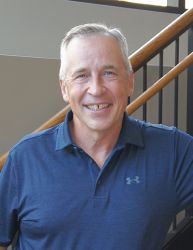